Pieter (Pierre) Mortier (1661 - 1711) was a French cartographer, engraver, and print seller active in Amsterdam during the later 17th and early 18th centuries.
The grandparents of Pieter Mortier were French refugees. Both Martijn de Mortier and his wife, Jenne de Lanoy, were born at Bon or Bondy near Paris. They came to Leiden, when they married in 1625. They became a son Pieter. This son Pieter married Anna Boot in Leiden in 1655. The family moved to Amsterdam in 1661 or 1662 after the birth of their son Pieter, who became a bookseller.

Pieter Mortier was listed as a member of the booksellers guide on 27 august 1685. Being from French heritage, he had more easy access to French cartographers such as De L'Isle, Sanson, Jaillot, de Fer and De Wit.
Consequently, much of Mortier's business was built upon leveraging the sophisticated Dutch printing establishment to issue embellished high quality editions of previously contemporary French maps.

In the greater context of global cartography, this was a significant advantage as most Dutch map publishes had, at this point, fallen into the miasma of reprinting their own outdated works.
By contrast, the cartographers of France were producing the most accurate and up to date charts anywhere.

Mortier's cartographic work culminated in the magnificent nautical atlas, Le Neptune Francois. Upon Pierre's death in 1711 this business was inherited by his widow.
In 1721 his son Cornelius Mortier took over the day to day operation of the firm.
Cornelius partnered with his brother-in-law Jean Covens to form one of history's great cartographic partnerships - Covens and Mortier - which continued to publish maps and atlases until about 1866. 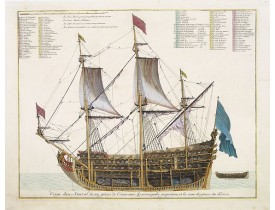 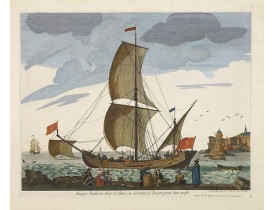 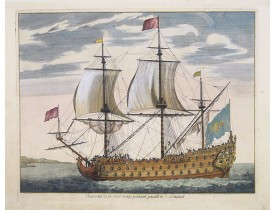 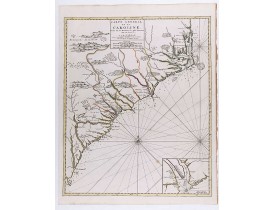 Location: 1700
MORTIER, P. - Carte General de la Caroline Dresse Sur les Memoires le plus Nouveaux.
Amsterdam 1700 - 565 x 465 mm.
With small variations, this is a copy of Robert Morden's influential map, extending from Baye St.Matheo to just north of the Albermarle River. With a detail inset of the town of Charlestown which is, ..
2,700€
Add to Cart
Add to Wish List Compare this Product
Ask Question
Showing 1 to 4 of 4 (1 Pages)