NIEUHOF, J. - An embassy from the East-India Company of the United Provinces, to the Grand Tartar Cham, Emperor of China deliver'd by their excellencies, Peter de Goyer and Jacob de Keyzer, at his imperial city of Peking.. 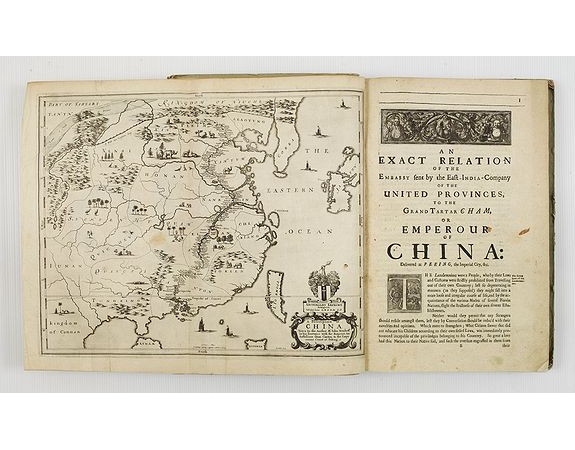 Very rare first English text edition of this most important and early resource on China and the Chinese. Three parts in one folio by John Macock for the author.
Part I: An Embassy. Part II: A narrative of the success of an embassage sent by John Maatzuyker de Badem. Part III: Appendix or [. . .] out of Athasius Kircher his antiquities of China.

This early account of China covers a wide variety of subjects including a large section on newly discovered plants, herbs, fruits of S. China.
With a folding map of all China, Corea, part of Japan, Formosa, South to the Kingdom of Cannan [Annam or Vietnam], Tartary. (340x430mm.)
The book contains a meticulous description of the people, laws, customs, provinces done in much detail. Lavishly illustrated with 121 text plates by W.Hollar. The work was one of the earliest English language texts which brought new and wondrous information back to England and Europe of a continent mostly unknown at that time.
The plan of "Grounplot … of the Emperours Palace at Peking", cut into plate mark. The two folding plates partly backed on verso lower margin with old paper, for protective reason only. The plate of the imperial court cut in top slightly shaving the printed area and with extended margin and slightly smaller in size. A good margin copy.
Based on 0 reviews. - Write a review
8,000€
290 views
Add to Cart
Ask Question
Add to Wish List Compare this Product