RUSSIAN SCHOOL. - (View of the Moscow Kremlin, seen from the Moskva River in the south). 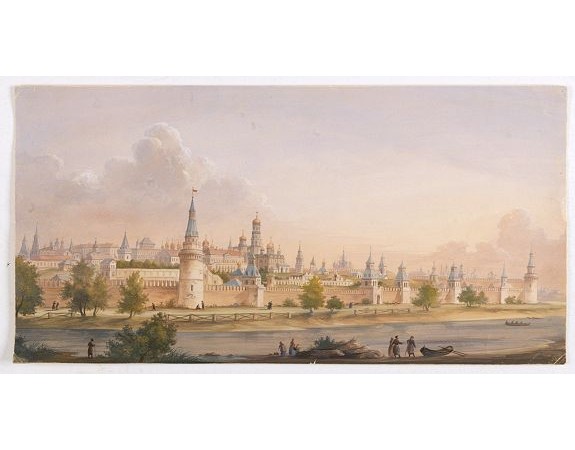 Anonymous, likely Russian School gouache drawing of Moscow Kremlin. The Kremlin is depicted in a typical 19th century romantic style and is seen from the Moskva river in the south. The Ivan the Great Bell Tower and Vasili Blazhenny cathedral in the background.

The Moscow Kremlin is a fortified complex at the heart of Moscow, overlooking the Moskva River to the south. The Moskva River played an important part in history of Moscow. Back then, it was used to transfer goods and raw materials. Basically, you could get as far as Black and Caspian seas from Moskva River, so the trade was flourishing.
The gouache does give a good impression of this fortified wall and its towers. The Great Kremlin Palace has net yet been constructed.
The name Kremlin means "fortress inside a city".
Based on 0 reviews. - Write a review
4,000€
215 views
Add to Cart
Ask Question
Add to Wish List Compare this Product