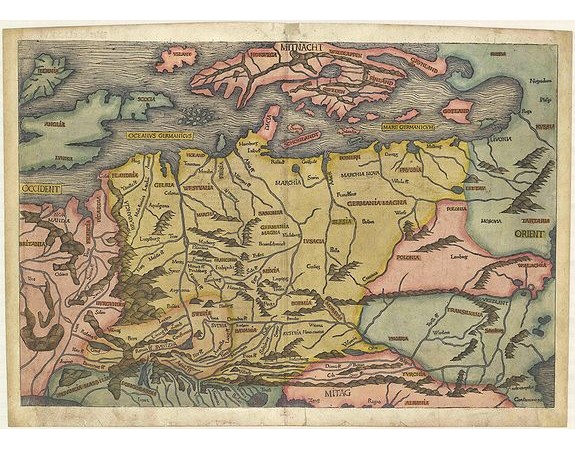 SCHEDEL, H. - (EUROPE).
Date: Nuremberg, 1493
Size: 392 x 575 mm.
Colouring: Coloured.
Condition: Skillfully restored at the bottom corners. On the right side some paper thinness. Small area ca. 1-3 mm part on the left side ( eg.: letter "B" in the world BRITANICA and some part on the lover right corner are replaced or redrawn in a professional way.

Map of Northern Europe and centered on Poland. First issue, with Latin text colophon and date on verso. The map is deemed to be the first printed map of Germany, even if it shows a larger area. W. B. Grinsberg characterized this map as the first modern map of northern and central Europe. The map ranges from the British Isles to Constantinople.
The designer has been identified as Hieronymus Münzer (1437-1508), who trained as a physician.
The Münzer map is one of the earliest to depict the Scandinavia peninsula.

Nordenskold credits the map of the north in the Zamoyski codes as the prototype for this map. The source for the central European portion is a manuscript map of 1460 of Germany by Cardinal Nicolas Cusanus (also Nicholas of Cusa), printed posthumously at Eichstätt in 1491.

Page from the richest illustrated Incunable, the famous: Nuremberg Chronicle, published the year that Columbus returned to Europe after discovering America. In May of 1493 appeared in the Latin language one of the earliest voluminous books, fully illustrated with 1809 woodcuts printed from 645 woodblocks.
The woodblock cutters were Michael Wolgemut, the well-known teacher of Albrecht Dürer, and his stepson Wilhelm Pleydenwurff. Wohlgemut was Albrecht Dürer's tutor between 1486-90 and recent scholarship has shown, Albrecht Dürer may also have collaborated, since some of the cuts bear a remarkably close resemblance to the Apocalypse illustrations.
The printing was carried out under the supervision of the great scholar-printer Anton Koberger, whose printing were famous throughout Europe.
Based on 0 reviews. - Write a review
5,000€
635 views
Add to Cart
Ask Question
Add to Wish List Compare this Product