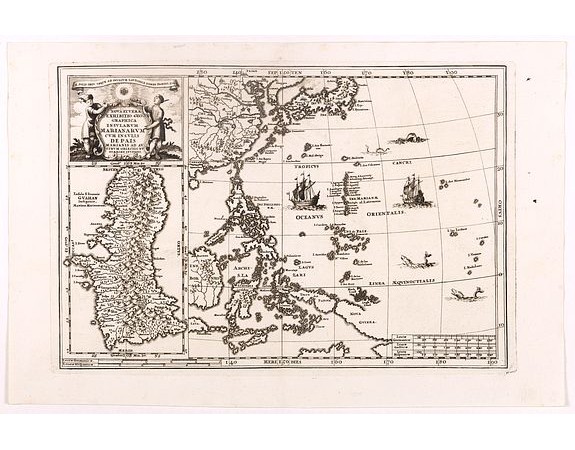 Attractive map of the Philippines, Japan, Korea and Indonesia with an inset of the island Guam, by the Jesuit Heinrich Scherer, printed in for Scherer's 'Atlas Novus'. Several fishes and ships decorate the seas.
Large decorative cartouche, large compass rose, sea monsters and sailing ships embellish this map.

Heinrich Scherer (1628-1704) taught as Professor of Hebrew, Mathematics and Ethics at the University of Dillingen until about 1680. Thereafter he obtained important positions as Official Tutor to the Royal Princes of Mantua and Bavaria. It was during his time in Munich as Tutor to the Princely house of Bavaria that his lifetime's work as a cartographer received acclaim and recognition.
Scherer's World Atlas, the Atlas Novus, first published in Munich between 1702 and 1710 and reissued in a second edition between 1730 and 1737, forms a singularly unusual, almost revolutionary work in terms of the development of European mapmaking at the beginning of the 18th Century.

Read more Early maps of South East Asia and maps of the Philippines. [+]
Based on 0 reviews. - Write a review
1,300€
93 views
Add to Cart
Ask Question
Add to Wish List Compare this Product