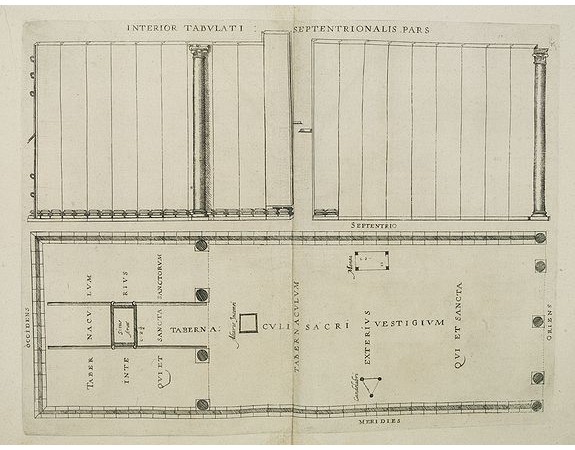 Two engravings on one sheet. In top the walls and in bottom the structure of the tabernacle itself. The gate (on the right) leads you in the outer court to the Brazen Altar behind which we find the Laver before entering the Holy place comprised of : the Table of Shrewbread, the Candlestick, leading to the Holy of Hollies : the Golden Altar and the Ark of the Covenant. The Tabernacle is known in Hebrew as the "Dwelling Place". It was a portable dwelling place for the divine presence from the time of the Hebrew Exodus from Egypt through the conquering of the land of Canaan. Its elements were made part of the final Temple in Jerusalem about the 10th century BC.The Tabernacle was a small tent which contained the most holy writings of the ancient Jews and which they took with them when they were traveling.
From an uncommon edition of Kerckelycke Historie van Neder-Landt which was a Dutch text edition of Agostino Torniello's Annales Sacri et Profani by Heribertus Rosweydus (Utrecht, 1569 - Antwerp, 1629).
Based on 0 reviews. - Write a review
30€
133 views
Add to Cart
Ask Question
Add to Wish List Compare this Product