WEBBER, J. - Balagans or summer habitations, with the method of drying fish at St. Peter and Paul, Kamtschatka. 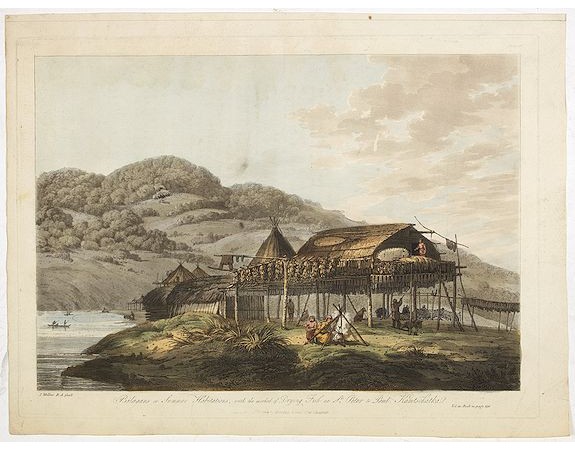 Balagans or summer habitations, with the method of drying fish at St. Peter and Paul, Kamtschatka, taken from "Views in the South Seas" being a very important and early views depicting scenes encountered while employed as draughtsman on Cook's third voyage, which has been called "the most striking publication resulting from Cook's expeditions". (Parsons Collection 136).
Underneath the title : London. Pubd. April 1, 1809 by Boydell & Compy. No. 90 Cheapside. In lower left corner "J. Webber R.A. fecit" and "Vol. III. Book VI. page 375" to the lower right. In upper right : Plate 11


Webber was more fully trained than any of the artists of the previous voyages, and he and Cook worked closely together to illuminate "the unavoidable imperfections of written accounts, by enabling us to preserve, and to bring home, such drawings of the most memorable scenes of our transactions, as could only be expected by a professed and skilled artist." (J. Cook & J. King, Voyage to the Pacific Ocean, London 1784, Vol I, p.5). Because he was there with Cook in the field, his paintings "constituted a new visual source for the study of history..." (Smith, Bernard, Art as Information. Sydney, 1978).
On his return Webber was appointed by the Admiralty to supervise the production of engravings that were made from his originals to illustrate the official account of 1784, these 12 plates were first published separately by Webber between August 1788 and August 1792, and Boydell first reissued the plates in their present form, with an additional four plates and with descriptive text in 1808, fifteen years after Webber's death. Copies with varying watermark dates are known, but Abbey does not distinguish them as separate editions, nor do other bibliographers: "The title page is dated 1808 in all copies, but the plate imprints are dated April, 1809, and the water mark dates vary widely copy by copy, apparently a feature peculiar to Boydell's color plate books" (Hill).

Based on 0 reviews. - Write a review
1,600€
117 views
Add to Cart
Ask Question
Add to Wish List Compare this Product