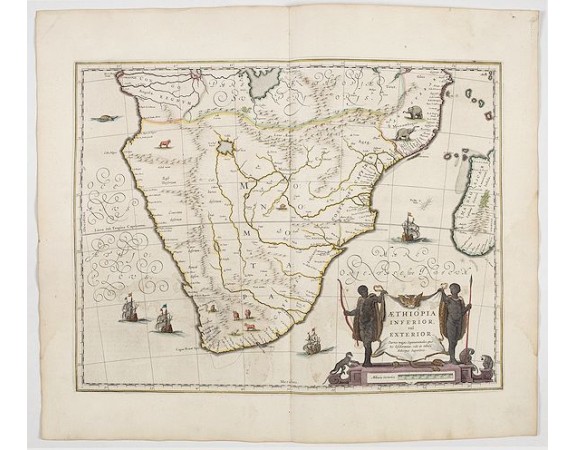 The standard map of South Africa throughout the 17th century. The lake out of which the 'Zambere' -the Zambesi- flows is probably based on reports of Lake Ngami, undiscovered until 1849. Then 20 miles long, it is today only marshland. The interior is filled with indigenous animals and ships sail the sea. The large title cartouche is drawn on an ox hide held up by natives, with monkeys and turtles at their feet.
From early on Willem Jansz. Blaeu aimed of publishing an atlas to compete with the Hondius-Jansson Atlas. By 1630, he had published at least 17 folio size maps.
Blaeu was able to realize his plan soon after he had acquired the copper plates of the atlas maps by Jodocus Hondius. The "Appendix followed in 1630.
In 1635 he finally realized a "international edition" of a world atlas, the "Theatrum Orbis Terrarum".
Based on 0 reviews. - Write a review
1,000€
236 views
Add to Cart
Ask Question
Add to Wish List Compare this Product