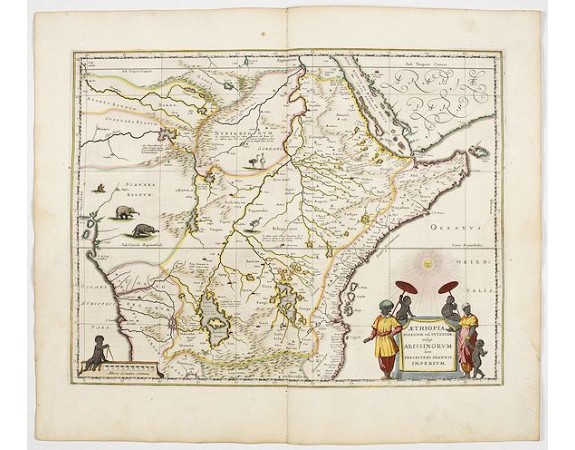 An attractive map of the Eastern African and the fictitious kingdom of Prester John. The map shows a major section of central and eastern Africa including Mozambique north to present day Sudan The map contains numerous coastal place names such as Mozambique Island, Quiloa, Mombaza, and Melinde indicating the importance of the area to both Arab, Portuguese, and traders and explorers from other countries. The Congo region on the west coast of Africa is included in this map. The two Ptolemaic lakes of Zaire and Zaflan are in the lower portion of the map. Lake Niger, and the supposed course of the Niger River, is shown flowing westward. This map is based on Ortelius' map of Prester John of 1573.
The myth of Prester John, the good king defeating the enemies of Christianity, was in part a response to Mongol and Islamic pressures on Christian Europe. Initially, Prester John was placed in Asia, but later in East Africa. The center of the map above ,Amara mons,, the kingdom of Prester John, shows a note in Latin to the effect that here the sons are Prester John are held in confinement. This map was copied by Janssonius and a number of other cartographers.
Like most Blaeu maps of Africa, this map is decorated with various animals. The Blaeu maps are ,esteemed by collectors for their decorative quality, historical importance, and as the highest expression of Dutch cartographic art during the period of its supremacy.
Based on 0 reviews. - Write a review
600€
545 views
Add to Cart
Ask Question
Add to Wish List Compare this Product