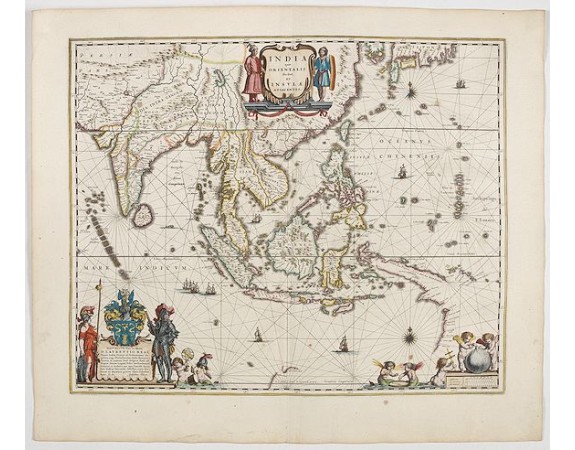 Extending from India to Japan and showing parts of Australia. It is indeed one of the first printed maps to show identifiable parts of Australia. It was not revised until 1664, by which time it was well out of date. The decoration consists of coloured title and scales cartouches with cherubs. In the left-hand lower corner, a dedication cartouche to Laurens real with allegorical figures.
From early on Willem Jansz. Blaeu aimed of publishing an atlas to compete with the Hondius-Jansson Atlas. By 1630, he had published at least 17 folio size maps.
Blaeu was able to realize his plan soon after he had acquired the copper plates of the atlas maps by Jodocus Hondius. The "Appendix followed in 1630.
In 1635 he finally realized a "international edition" of a world atlas, the "Theatrum Orbis Terrarum".
Based on 0 reviews. - Write a review
2,500€
113 views
Add to Cart
Ask Question
Add to Wish List Compare this Product