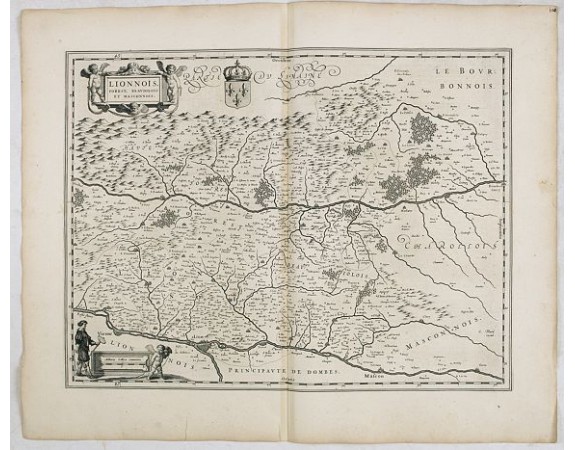 FIRST EDITION, FIRST ISSUE OF THIS MAP. From the 1634 edition of Blaeu's Atlas Novus, the first edition of this work.
Map beautifully engraved map of a province of east-central France including the rivers Loire and Rhone west of Lyon, a city situated between Paris and Marseilles. Orientated with west at the top.
The lovely title cartouche has two putti either side of it, together with another mileage cartouche with another putti and a surveyor with surveying instruments. Regional coat-of-arms also engraved.
From early on Willem Jansz. Blaeu aimed of publishing an atlas to compete with the Hondius-Jansson Atlas. By 1630, he had published at least 17 folio size maps.
Blaeu was able to realize his plan soon after he had acquired the copper plates of the atlas maps by Jodocus Hondius. The "Appendix followed in 1630.
In 1635 he finally realized a "international edition" of a world atlas, the "Theatrum Orbis Terrarum".

Read more about the Novus Atlas of 1634 and Willem Blaeu. [+]
Based on 0 reviews. - Write a review
80€
239 views
Add to Cart
Ask Question
Add to Wish List Compare this Product