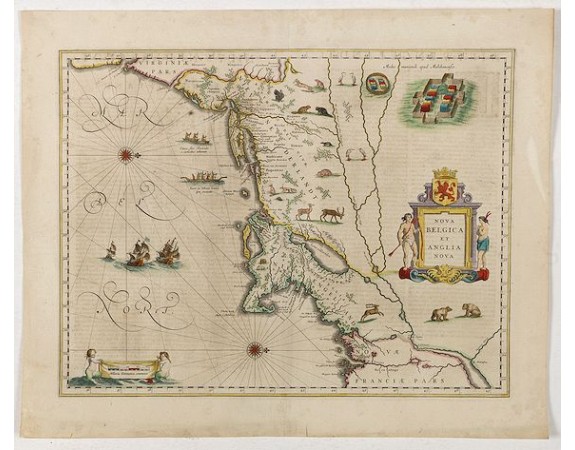 Orientated with north to the right. This is one of the earliest maps to concentrate solely on this area of the colonies, excluding Virginia and the extreme north east coastline of the States.
This would appear to be the first map to include scenes of Indian natives paddling their canoes and also has scenes of Indian villages and habitations, European vessels, animals and birds on each side of the title cartouche.
Lake Champlain, as usual in this period, is shown too far to the east.
The coastal strip is well detailed with settlement names, testifying to the Dutch and English interest in the area, but the map is, above all, a fine example of the superb design and craftsmanship employed by the Blaeu's in their work.
Based on the manuscript survey by Adrian Block, completed about the year 1614.

As Willem Blaeu died in 1638 most of his maps are actually published by his son Joan. This maps carries his (engraved) signature and was actually published in volume II of a French edition of his "Le Theatre du Monde ou Nouvel Atlas", dated 1638, therefore published the last year of his life.
From early on Willem Jansz. Blaeu aimed of publishing an atlas to compete with the Hondius-Jansson Atlas. By 1630, he had published at least 17 folio size maps. Blaeu was able to realize his plan soon after he had acquired the copper plates of the atlas maps by Jodocus Hondius. The "Appendix followed in 1630.
In 1635 he finally realized a "international edition" of a world atlas, the "Theatrum Orbis Terrarum".
This example is from a very rare 1638 French text edition, which has the same copperplates as the 1635 edition, however the text on the verso was reset in two text columns. This edition is the last version the great master printed under his patronage.
Based on 0 reviews. - Write a review
2,500€
100 views
Add to Cart
Ask Question
Add to Wish List Compare this Product