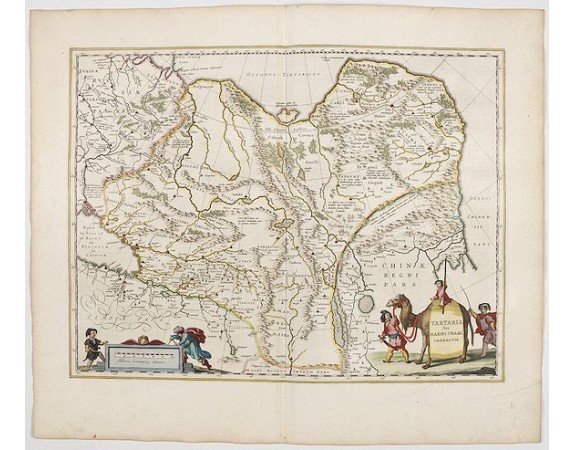 A detailed and decorative map of Tartary and the northern part of China. The very northern tip of Korea included.
The Chinese Great Wall is depicted, with Central Asia, extending from Mongolia and Xanadu, to the Caspian and the Volga River, and to Tibet and the Upper Ganges River.
The deserts are filled with a wild assortment of devils and dragons, being held at bay from China by the Great Wall. The title cartouche appears on a banner carried by a camel led by natives.
Decorative mileage scale in lower left corner.
From early on Willem Jansz. Blaeu aimed of publishing an atlas to compete with the Hondius-Jansson Atlas. By 1630, he had published at least 17 folio size maps.
Blaeu was able to realize his plan soon after he had acquired the copper plates of the atlas maps by Jodocus Hondius. The "Appendix followed in 1630.
In 1635 he finally realized a "international edition" of a world atlas, the "Theatrum Orbis Terrarum".
Based on 0 reviews. - Write a review
500€
112 views
Add to Cart
Ask Question
Add to Wish List Compare this Product