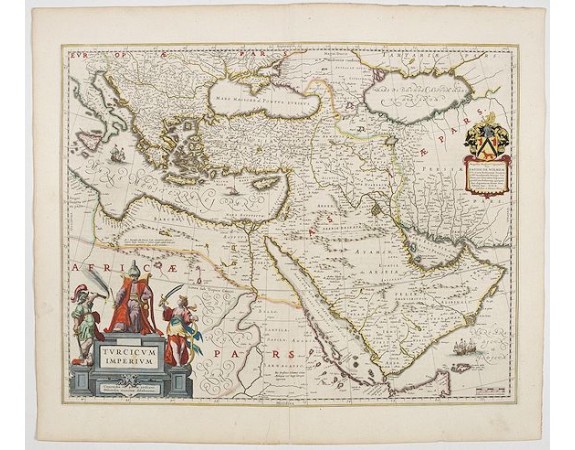 A very handsome map with a particularly fine cartouche showing the Turkish Sultan on his throne and allegorical figures at either side brandishing weapons. At right is a smaller cartouche with a dedication by the Blaeu's. Sailing ships can be seen in the Arabian Sea and the Mediterranean. The geography is reasonably accurate for the time with many place names given. Armenia and George ( Giorgia ) are named. An impressive and attractive map.
From early on Willem Jansz. Blaeu aimed of publishing an atlas to compete with the Hondius-Jansson Atlas. By 1630, he had published at least 17 folio size maps.
Blaeu was able to realize his plan soon after he had acquired the copper plates of the atlas maps by Jodocus Hondius. The "Appendix followed in 1630.
In 1635 he finally realized a "international edition" of a world atlas, the "Theatrum Orbis Terrarum".
Based on 0 reviews. - Write a review
1,500€
263 views
Add to Cart
Ask Question
Add to Wish List Compare this Product