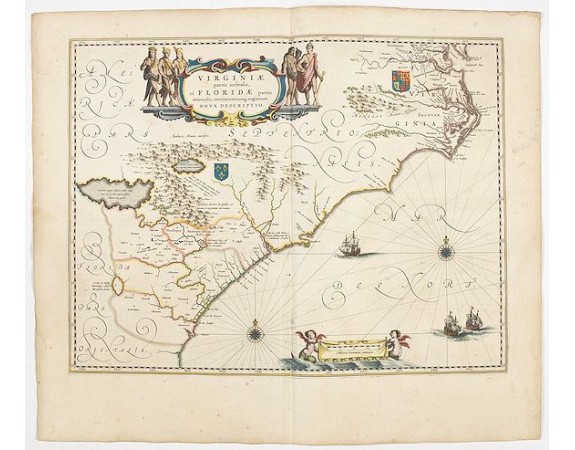 Blaeu based this map on the Mercator-Hondius of 1606. A number of geographical improvements, however were incorporated, although two large fictions lakes accompanied by explanatory legends in Latin, still appear on the map. The British and French royal coats of arms indicate the territorial interests of the two nations at the time.
A settlement by Irish planters in 1621 at Newport News in the north, near Chesapeake Bay is shown, and also Jamestown, further in stream.
The Carolina coast is improved with two large bays.
From early on Willem Jansz. Blaeu aimed of publishing an atlas to compete with the Hondius-Jansson Atlas. By 1630, he had published at least 17 folio size maps.
Blaeu was able to realize his plan soon after he had acquired the copper plates of the atlas maps by Jodocus Hondius. The "Appendix followed in 1630.
In 1635 he finally realized a "international edition" of a world atlas, the "Theatrum Orbis Terrarum".
Based on 0 reviews. - Write a review
1,500€
164 views
Add to Cart
Ask Question
Add to Wish List Compare this Product