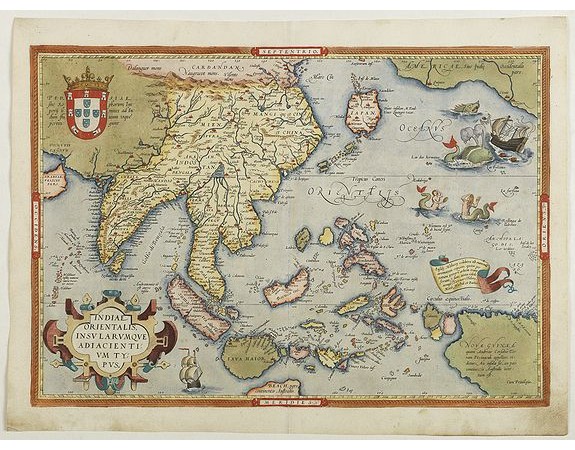 Nice Ortelius' map of SE Asia, Japan, and the Philippines, etc from the rare French text edition of 1587.
The map includes Beach and other information drawn from Marco Polo.
The map also includes a portion of the West Coast of North America, including several mythical names in California. Based upon Mercator's world map of 1569.
The difficulty of mapping this archipelago was such, that for centuries to come maps of this area remain faulty. Sumatra and Java are heavily oversized, and the Philippines are incomplete and without the Northern island of Luzon.
The mermaids, who are beautifying themselves rather than heeding the whales' attack on nearby ships, are based on those occurring on Diego Gutierrez map of America.
From a German text edition of the Atlas "Theatrum Orbis Terrarum". The privilegium is found in the lower right corner.
Based on 0 reviews. - Write a review
2,700€
761 views
Add to Cart
Ask Question
Add to Wish List Compare this Product