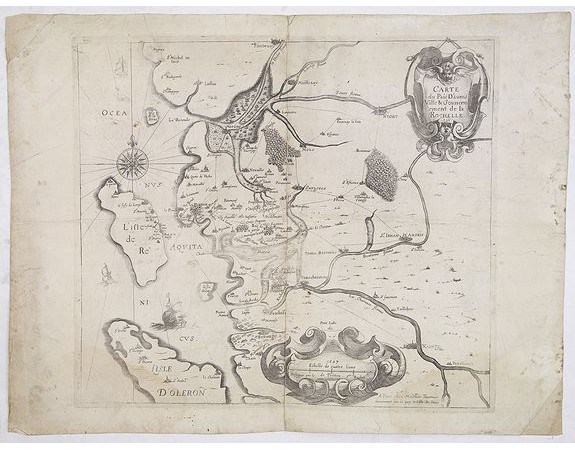 Scarce map depicting the area of La Rochelle, with the Isle de Ré, Aix and Ile d'Oléron. Prepared by Jérome Bachot (1596-1635?). From "Theatre geographique du Royaume de France. . . .". Here with the date 1627.
On the right, the city of Saint-Jean-d’Angely, a protestant stronghold during the Wars of religion.
Verso has a text and music lines by Adrian Le Roy (c. 1520-1598) an influential French music publisher, lutenist, guitarist, composer and music educator.
Le Roy was born in the town of Montreuil-sur-Mer in northern France to a wealthy family. Very little is actually known about his formative years but he was probably a chorister and studied the lute, guitar and cittern with various teachers.
He became an accomplished musician and entered the service of, first, Claude de Clermont, then, Jacques II (Baron de Semblançay and Viscount of Tours), both members of the aristocracy who had influence at court. In 1546 he met the publisher Jean de Brouilly in Paris and married his daughter Denise de Brouilly.Le Roy and his cousin Robert Ballard (ca. 1525-1588)[3] founded the printing firm "Le Roy & Ballard", and in August 1551 obtained a royal privilege from Henry II to print music.
In February 1553, the company was awarded the title of "imprimeur du Roi en musique" (previously held by Pierre Attaignant). This office, which was renewed by successive monarchs, gave the company legal protection against competitors and commercially-valuable prestige.[5] Royal patronage was a major factor in the company's success since it ensured both a ready supply of new music from the court musicians and a market for its publications.
Over the following two decades other rival companies dropped out of the market and from the 1570s onwards Le Roy & Ballard enjoyed a virtual monopoly in music publishing. The publishing house lasted to the 19th century.
While Robert Ballard looked after the business side, Le Roy was the artistic director. He achieved renown as a composer and arranger of songs and instrumentals, his published work including at least six books of tablature for the lute, 5 volumes for the guitar and arrangements for the cittern. Le Roy also helped to ensure the success of composer Orlande de Lassus, introducing him to court and publishing his music.
Le Roy died in Paris in 1598. (Wikipedia).
Based on 0 reviews. - Write a review
750€
251 views
Add to Cart
Ask Question
Add to Wish List Compare this Product