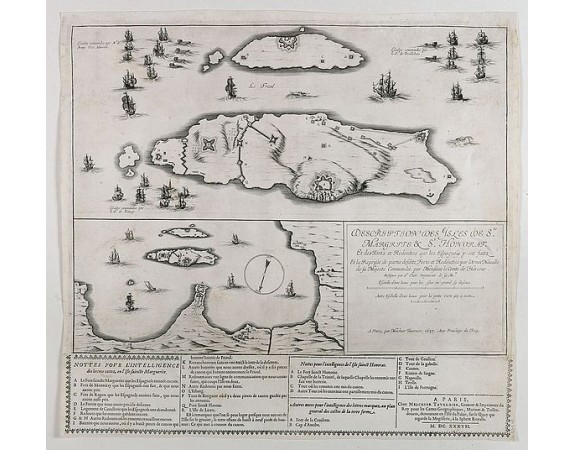 Rare map illustrating the naval battle between the French and Spanish off the Coast near La Rochelle.
The map shows the battle of the Isles de Lerins, during the Franco-Spanish War (Thirty Years War), fought between March 24 and May 13, 1637. The battle resulted in the Spanish surrender of the two islands of Sainte Marguerite and Saint Honorat to the French.

Below the map, a separately published text panel provides details of the battle, based upon a letter key.

The battle included both naval and land operations and mobilized 39 ships, 11 galleys, 6 fire ships, 12 flutes, and a large fleet of transport. The Spanish garrison was reduced and the French attacked with all their forces. On March 24, 1637 began the siege of the Lérins Islands and the beginning of the attack of five Spanish forts. After a siege of 45 days, the Spaniards from Sainte-Marguerite Island capitulated on May 12 and those of Saint- Honorat Island May 13.
Based on 0 reviews. - Write a review
1,500€
140 views
Add to Cart
Ask Question
Add to Wish List Compare this Product