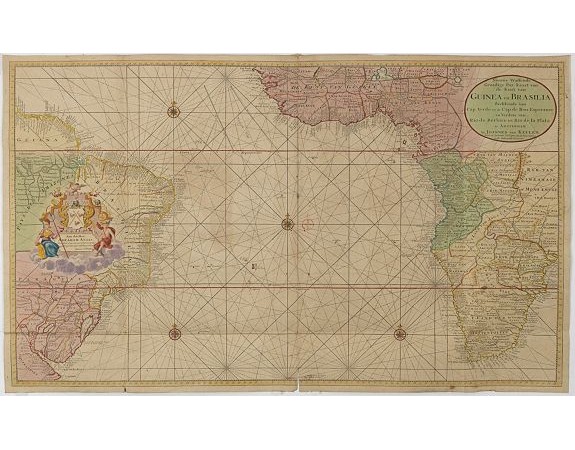 Rare two sheet sea chart of the coasts of Brazil, West Africa and South Africa, published by Johannes Van Keulen (the younger), circa 1720.
The chart shows the western coast of Africa but the information provided in the map for Inland territories is wide. The south American coast of Brazil, the latter with a large, decorative, dedication cartouche inland, and Guyana.
In left hand part a large dedicational cartouche to Abraham Anias, with signature of Johannes van Keulen.
Abraham Anias (1694-1750) was the stepson of the Middelburg mapmaker Johannes Roggeveen ( 1659-1729 ) . Anias was trained as a cartographer and continued the business of his stepfather after his death. Anias was mapmaker for the VOC and the WIC and "ijkmeester" for the Zeeland Chamber.
Based on 0 reviews. - Write a review
1,750€
39 views
Add to Cart
Ask Question
Add to Wish List Compare this Product